How To Fight With Your Spouse…Or Anyone Else 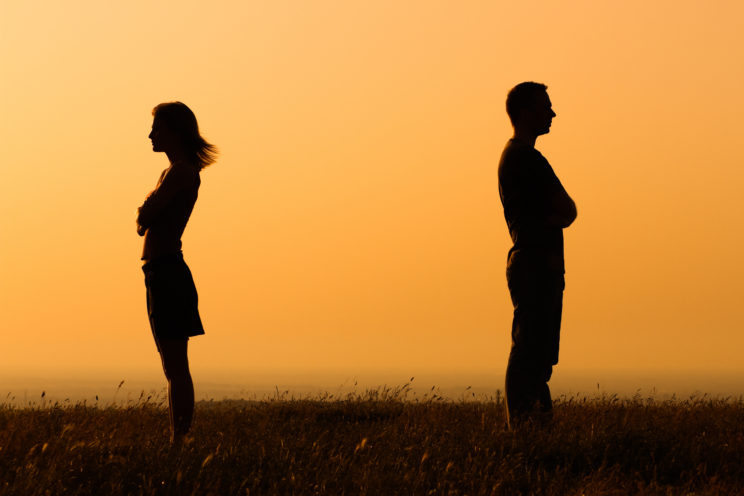 The other day I found a greeting card I bought maybe 10 years ago. I don’t think I ever intended to give it to anyone, I just found it compelling enough to add to my small collection of witty, sappy, hilarious, relate-able, or otherwise unexpected one-liner cards that have caught my attention over the years. The front shows a snapshot of a woman talking on a phone, head turned, with a slight smile on her face. The inside reads as follows:

well, it’s not really us…

The message reflects a good bit of difficulty in either pinpointing the problem between them or clearly communicating the issue with the poor individual on the receiving end of the card. And it’s always made me smile because it so perfectly captures the awkward tension of being at odds with someone you were once close to.

I smile because it captures it. Not because it’s actually funny in real life. In real life, that tension can eat away at us – and our relationships – and cause no small dent in our sense of happiness, contentment, and general well being. So much so, that we often try to protect ourselves by either putting up emotional barriers and fighting more or just checking out. But our relationships are too important to allow disagreements to fester until, like the woman in the card, we just throw blame around to “us”, “me”, and finally “you”, and fail to do the work to fight well.

That’s right, I said Fight. Well. I’m not advocating for gliding over disagreements for the sake of unity. I’m advocating for identifying your target, improving your aim, and increasing the weapons in your arsenal to ward off disunity.

For our purposes here, let’s focus on identifying your target. I’ll give you a hint. It’s not your spouse. Yes, I know he didn’t take out the trash. Again. Yes I know she loves Target trips more than family budget meetings. And yes, I know some of you are in the throes of intense relational conflict and only wish these examples were the extent of the turmoil in your home. My heart breaks for you. But before you throw another jab in their direction or turn away in retreat, let’s take a moment to consider what it means to identify your target.

In its most enlightened, fulfilling state, marriage is designed to bring two imperfect, maybe even incompatible people together and chip away at rough edges of selfishness, pride, and a whole host of other ills, as iron sharpens iron (Prov. 27:17). The chipping away isn’t the purpose though, it’s the means through which the couple jointly models and enjoys a union built on mutual respect, trust, generosity of spirit, forgiveness, and humility, and individually recognizes their own strengths and weaknesses that can be complemented by those of their counterpart. These attributes can then be passed on to their family, community, and beyond. Literally, the implications for positive impact are boundless. I thought of this when I read a recent tweet from the Gottman Institute (@GottmanInst) that stated in part, “If you want to change the world, go home and love your family”.

So, uh… no pressure, right? Hey, I’m not suggesting any of us are already perfectly experiencing such a selfless and transformative union. But we can dream about it.

Nope, FIGHT for it.

Ah, yes, this whole thing is about fighting, isn’t it? And when something threatens the bonds of unity, we must not be so quick to hurl our attacks at the very one we pledged to remain tied to. How devastating would it be to a cause if soldiers turned on each other in battle rather than identifying the real enemy and fighting against it together!

First, what do you need to fight against? A demanding schedule that’s squeezing the spontaneity and fun out of your relationship? Old hurts that make you timid or afraid to be vulnerable? A cluttered mind that can’t make sense of what you even need to ask for from your spouse? Pent up anger and frustration, even rage, over unmet needs, thoughtless oversights, and intentional indiscretions?

Secondly, what are you fighting for? A renewed sense of connection with your spouse? The freedom to be honest and raw without fear of being judged, scorned, or ignored? The space to “not know what to do” and work together for shared solutions? Acknowledgment of your pain? Real commitment to positive and appropriate change?

Regardless of what your specific answers to the questions above are, ultimately, I believe most of us need to fight against both external and internal forces that threaten our unity and fight for each other and the commitment we share. Perhaps while asking what we fight against and fight for, we also need to regularly remind ourselves of who we must fight with, as in, alongside, together. Remember the analogy above of the soldiers? We do well by our relationships when we view that which threatens to tear us apart as the enemy rather than each other and choose – even when we don’t necessarily want to – to join forces and fight for our shared good.

Once we identify the force(s) that threaten to chip away at our sense of connection to each other, then we can do the work of improving our aim (working on solutions for the problem we’ve identified rather than hurling insults at each other) and increasing our arsenal of weapons (cultivating relational skills such as active listening, clear communication of our needs, intentional service, and more).

Allow me to end with this. I can anticipate some of the ways an article like this might not sit well. Relationships are complicated mostly because each person brings their own unique mix of personality, pain, and perspectives. So I’m aware that for every person who gains some clarity from this information, there’s another who is left with more questions and a whole bunch of doubt.* May I encourage you to keep asking the questions? And maybe, get some help from a trusted mentor or counselor to help fill in some of the gaps. Our relationships with those who could be closest to us are important. And they are worth fighting for.

*It is important to note that if you are in a harmful, abusive relationship, you must first seek personal safety before addressing the underlying issues of the relationship. You may contact the National Domestic Violence Hotline at (800) 799-SAFE(7233).

5 Better Ways to Help Your Friends

by: Tim Sosin, MA, NCC. I recently made a friend in his early 20’s, and he told me about some rela